DESCRIPTION PER WIKIPEDIA:
Angel and the Badman is a 1947 American Western film written and directed by James Edward Grant and starring John Wayne, Gail Russell, Harry Carey and Bruce Cabot. The film is about an injured gunfighter who is nursed back to health by a Quaker girl and her family whose way of life influences him and his violent ways. Angel and the Badman was the first film Wayne produced as well as starred in, and was a departure for this genre at the time it was released. Writer-director James Edward Grant was Wayne’s frequent screenwriting collaborator.

In 1975, the film entered the public domain in the United States because the claimants did not renew its copyright registration in the 28th year after publication. 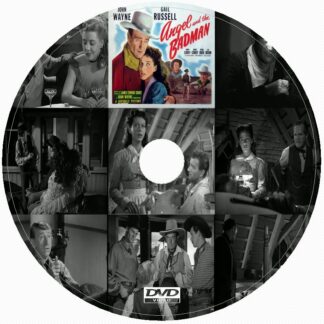