You are purchasing Aristotle Collection Audiobook MP3 On 21 Discs, Librivox Public Domain Recording. We find the item and place them on a custom CD. This item will work on your computer and some devices that can play MP3’s.

The Categories (Greek Κατηγορίαι Katēgoriai; Latin Categoriae or Praedicamenta) is a text from Aristotle’s Organon that enumerates all the possible kinds of things that can be the subject or the predicate of a proposition. They are “perhaps the single most heavily discussed of all Aristotelian notions”.[1] The work is brief enough to be divided, not into books as is usual with Aristotle’s works, but into fifteen chapters.

The Categories places every object of human apprehension under one of ten categories (known to medieval writers as the Latin term praedicamenta). Aristotle intended them to enumerate everything that can be expressed without composition or structure, thus anything that can be either the subject or the predicate of a proposition.

On the Soul (Greek: Περὶ Ψυχῆς, Peri Psychēs; Latin: De Anima) is a major treatise written by Aristotle c. 350 BC.[1] It is not about spirituality but rather a work in what might best be described as biopsychology, a description of the subject of psychology within a biological framework.[2][3] His discussion centres on the kinds of souls possessed by different kinds of living things, distinguished by their different operations. Thus plants have the capacity for nourishment and reproduction, the minimum that must be possessed by any kind of living organism. Lower animals have, in addition, the powers of sense-perception and self-motion (action). Humans have all these as well as intellect.

The title of this work means “household management” and is derived from the Greek word, οἶκος, oikos, meaning “house/household”. The term includes household finance as it is commonly known today and also defines the roles members of the household should have. In a broad sense the household is the beginning to economics as a whole. The natural, everyday activities of maintaining a house are essential to the beginnings of economy. From farming, cleaning, and cooking to hiring workers and guarding your property, the household can offer a model for a modern understanding of society. The two books that comprise this treatise explore the meaning of economics while showing that it has many different aspects.

The Eudemian Ethics (Greek: Ἠθικὰ Εὐδήμεια; Latin: Ethica Eudemia[1] or De moribus ad Eudemum) is a work of philosophy by Aristotle. Its primary focus is on ethics, making it one of the primary sources available for study of Aristotelian ethics. It is named for Eudemus of Rhodes, a pupil of Aristotle who may also have had a hand in editing the final work.[2] It is commonly believed to have been written before the Nicomachean Ethics, although this is controversial.

The Magna Moralia (Latin for “Great Ethics”) is a treatise on ethics traditionally attributed to Aristotle, though the consensus now is that it represents an epitome of his ethical thought by a later, if sympathetic, writer. Several scholars have disagreed with this, taking the Magna Moralia to be an authentic work by Aristotle, notably Friedrich Schleiermacher, Hans von Arnim, and J. L. Ackrill. In any case, it is considered a less mature piece than Aristotle’s other ethical works, viz. the Nicomachean Ethics, the Eudemian Ethics, and Virtues and Vices. There is some debate as to whether they follow more closely the Eudemian or the Nicomachean version of the Ethics.

Metaphysics (Greek: τὰ μετὰ τὰ φυσικά; Latin: Metaphysica;[1] lit: “the beyond the physical”) is one of the principal works of Aristotle and the first major work of the branch of philosophy with the same name. The principal subject is “being qua being,” or being insofar as it is being. It examines what can be asserted about any being insofar as it is and not because of any special qualities it has. Also covered are different kinds of causation, form and matter, the existence of mathematical objects, and a prime-mover God.

On Generation And Corruption – Aristotle Audiobook MP3 On CD

On Generation and Corruption (Ancient Greek: Περὶ γενέσεως καὶ φθορᾶς; Latin: De Generatione et Corruptione), also known as On Coming to Be and Passing Away is a treatise by Aristotle. Like many of his texts, it is both scientific, part of Aristotle’s biology, and philosophic. The philosophy is essentially empirical; as in all of Aristotle’s works, the inferences made about the unexperienced and unobservable are based on observations and real experiences.

De Interpretatione or On Interpretation (Greek: Περὶ Ἑρμηνείας, Peri Hermeneias) is the second text from Aristotle’s Organon and is among the earliest surviving philosophical works in the Western tradition to deal with the relationship between language and logic in a comprehensive, explicit, and formal way. The work is usually known by its Latin title.

On The Heavens – Aristotle Audiobook MP3 On CD

On the Heavens (Greek: Περὶ οὐρανοῦ; Latin: De Caelo or De Caelo et Mundo) is Aristotle’s chief cosmological treatise: written in 350 BC it contains his astronomical theory and his ideas on the concrete workings of the terrestrial world. It should not be confused with the spurious work On the Universe (De mundo, also known as On the Cosmos).

On The Parts Of Animals – Aristotle Audiobook MP3 On CD

Parts of Animals (or On the Parts of Animals; Greek Περὶ ζῴων μορίων; Latin De Partibus Animalium) is one of Aristotle’s major texts on biology. It was written around 350 BC. The whole work is roughly a study in animal anatomy and physiology; it aims to provide a scientific understanding of the parts (organs, tissues, fluids, etc.) of animals and asks whether these parts were designed or arose by chance.

Translated by Various. Opuscula is a collection of shorter books that may or may not have been written by Aristotle. 1. On Colours 2. On Things Heard 3. Physiognomonics 4. On Plants 5. On Marvellous Things Heard 6. Mechanics 7. On Indivisible Lines 8. The Situations and Names of Winds 9. On Melissus, Xenophanes, and Gorgias – Summary by Geoffrey Edwards

The Parva Naturalia (a conventional Latin title first used by Giles of Rome: “short treatises on nature”) are a collection of seven works by Aristotle, which discuss natural phenomena involving the body and the soul. They form parts of Aristotle’s biology.

The Physics (Greek: Φυσικὴ ἀκρόασις Phusike akroasis; Latin: Physica, or Naturales Auscultationes, possibly meaning “lectures on nature”) is a named text, written in ancient Greek, collated from a collection of surviving manuscripts known as the Corpus Aristotelicum, attributed to the 4th-century BC philosopher Aristotle.

Aristotle’s Poetics (Greek: Περὶ ποιητικῆς Peri poietikês; Latin: De Poetica;[1] c. 335 BC[2]) is the earliest surviving work of dramatic theory and first extant philosophical treatise to focus on literary theory.[3] In this text Aristotle offers an account of ποιητικῆς, which refers to poetry or more literally “the poetic art,” deriving from the term for “poet; author; maker,” ποιητής. Aristotle divides the art of poetry into verse drama (to include comedy, tragedy, and the satyr play), lyric poetry, and epic. The genres all share the function of mimesis, or imitation of life, but differ in three ways that Aristotle describes:

2.Difference of goodness in the characters.

3.Difference in how the narrative is presented: telling a story or acting it out.

The analysis of tragedy in the Poetics constitutes the core of the discussion.[4] Although the text is universally acknowledged in the Western critical tradition, “almost every detail about his seminal work has aroused divergent opinions”.[5] The work was lost to the Western world for a long time. It was available in the Middle Ages and early Renaissance only through a Latin translation of an Arabic version written by Averroes.

Politics (Greek: Πολιτικά, Politiká) is a work of political philosophy by Aristotle, a 4th-century BC Greek philosopher.

The end of the Nicomachean Ethics declared that the inquiry into ethics necessarily follows into politics, and the two works are frequently considered to be parts of a larger treatise—or perhaps connected lectures—dealing with the “philosophy of human affairs”. The title of the Politics literally means “the things concerning the polis”.

The Posterior Analytics (Greek: Ἀναλυτικὰ Ὕστερα; Latin: Analytica Posteriora) is a text from Aristotle’s Organon that deals with demonstration, definition, and scientific knowledge. The demonstration is distinguished as a syllogism productive of scientific knowledge, while the definition marked as the statement of a thing’s nature, … a statement of the meaning of the name, or of an equivalent nominal formula.

Aristotle’s Rhetoric (Ancient Greek: Ῥητορική, romanized: Rhētorikḗ; Latin: Ars Rhetorica[1]) is an ancient Greek treatise on the art of persuasion, dating from the 4th century BCE. The English title varies: typically it is titled Rhetoric, the Art of Rhetoric, On Rhetoric, or a Treatise on Rhetoric.

Sophistical Refutations (Greek: Σοφιστικοὶ Ἔλεγχοι; Latin: De Sophisticis Elenchis) is a text in Aristotle’s Organon in which he identified thirteen fallacies.[note 1] According to Aristotle, this is the first work to treat the subject of deductive reasoning (Soph. Ref., 34, 183b34 ff.).

The Constitution Of Athens – Aristotle Audiobook MP3 On CD

The Nicomachean Ethics (/ˌnɪkoʊˈmækiən/; Ancient Greek: Ἠθικὰ Νικομάχεια, Ēthika Nikomacheia) is the name normally given to Aristotle’s best-known work on ethics. The work, which plays a pre-eminent role in defining Aristotelian ethics, consists of ten books, originally separate scrolls, and is understood to be based on notes from his lectures at the Lyceum. The title is often assumed to refer to his son Nicomachus, to whom the work was dedicated or who may have edited it (although his young age makes this less likely). Alternatively, the work may have been dedicated to his father, who was also called Nicomachus.

The Topics (Greek: Τοπικά; Latin: Topica) is the name given to one of Aristotle’s six works on logic collectively known as the Organon. The treatise presents the art of dialectic — the invention and discovery of arguments in which the propositions rest upon commonly held opinions or endoxa (ἔνδοξα in Greek).[1] Topoi (τόποι) are “places” from which such arguments can be discovered or invented. 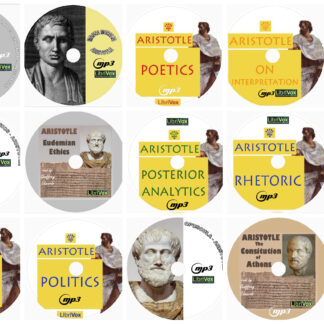