“Bartleby, the Scrivener: A Story of Wall Street” is a short story by the American writer Herman Melville, first serialized anonymously in two parts in the November and December 1853 issues of Putnam’s Magazine, and reprinted with minor textual alterations in his The Piazza Tales in 1856. In the story, a Wall Street lawyer hires a new clerk who, after an initial bout of hard work, refuses to make copies or do any other task required of him, with the words “I would prefer not to.”

Numerous critical essays have been published about the story, which scholar Robert Milder describes as “unquestionably the masterpiece of the short fiction” in the Melville canon

Benito Cereno is a novella by Herman Melville, a fictionalized account about the revolt on a Spanish slave ship captained by Don Benito Cereno, first published in three installments in Putnam’s Monthly in 1855. The tale, slightly revised, was included in his short story collection The Piazza Tales that appeared in May 1856. According to scholar Merton M. Sealts Jr., the story is “an oblique comment on those prevailing attitudes toward blacks and slavery in the United States that would ultimately precipitate civil war between North and South”.[1] The famous question of what had cast such a shadow upon Cereno was used by American author Ralph Ellison as an epigraph to his 1952 novel Invisible Man, excluding Cereno’s answer, “The negro.” Over time, Melville’s story has been “increasingly recognized as among his greatest achievements”

Billy Budd, Sailor is a novella by American writer Herman Melville left unfinished at Melville’s death in 1891. Acclaimed by critics as a masterpiece when a hastily transcribed version was finally published in 1924, it quickly took its place as a classic second only to Moby-Dick among Melville’s works. Budd is a “handsome sailor” who strikes and inadvertently kills his false accuser, Master-at-arms John Claggart. The ship’s Captain, Edward Vere, recognizes the innocence of Budd’s intent but the law of mutiny requires him to sentence Billy to be hanged.

Melville began work on it in November 1886, revising and expanding from time to time, but left the manuscript in disarray. Melville’s widow Elizabeth began to edit the manuscript for publication, but was not able to decide her husband’s intentions at key points, even his intended title. Raymond M. Weaver, Melville’s first biographer, was given the manuscript and published the 1924 version, which was marred by misinterpretation of Elizabeth’s queries, misreadings of Melville’s difficult handwriting, and even inclusion of a preface Melville had cut. Melville scholars Harrison Hayford and Merton M. Sealts Jr. published what is considered the best transcription and critical reading text in 1962.[1] In 2017, Northwestern University Press published a “new reading text” based on a “corrected version” of Hayford and Sealts’ genetic text prepared by G. Thomas Tanselle.[2]

Billy Budd has been adapted into film, a stage play, and an opera.

The Confidence-Man: His Masquerade, first published in New York on April Fool’s Day 1857, is the ninth book and final novel by American writer Herman Melville. The book was published on the exact day of the novel’s setting.

Centered on the title character, The Confidence-Man portrays a group of steamboat passengers. Their interlocking stories are told as they travel the Mississippi River toward New Orleans. The narrative structure is reminiscent of the late 1300s Canterbury Tales. Scholar Robert Milder notes: “Long mistaken for a flawed novel, the book is now admired as a masterpiece of irony and control, although it continues to resist interpretive consensus.”[1] After the novel’s publication, Melville turned from professional writing to become a lecturer, mainly addressing his worldwide travels, and later for nineteen years a federal government agent.

“The Encantadas, or Enchanted Isles” is a novella by American author Herman Melville. First published in Putnam’s Magazine in 1854, it consists of ten philosophical “Sketches” on the Encantadas, or Galápagos Islands. It was collected in The Piazza Tales in 1856. The Encantadas was a success with the critics,[1] and contained some of Melville’s “most memorable prose”.

Mardi, and a Voyage Thither is the third book by American writer Herman Melville, first published in London in 1849. Beginning as a travelogue in the vein of the author’s two previous efforts, the adventure story gives way to a romance story, which in its turn gives way to a philosophical quest.

-PIERRE, OR THE AMBIGUITIES  – Herman Melville Audiobook MP3 On CD

Pierre; or, The Ambiguities is the seventh book by American writer Herman Melville, first published in New York in 1852. The novel, which uses many conventions of Gothic fiction, develops the psychological, sexual, and family tensions between Pierre Glendinning; his widowed mother; Glendinning Stanley, his cousin; Lucy Tartan, his fiancée; and Isabel Banford, who is revealed to be his half-sister. According to scholar Henry A. Murray, in writing Pierre Melville “purposed to write his spiritual autobiography in the form of a novel” rather than to experiment and incidentally work some personal experience into the novel.[1]

Published after the lukewarm reaction to Moby-Dick, Pierre was a critical and financial disaster. Reviewers universally condemned its morals and its style. More recent critics have shown greater sympathy toward the book, seeing it as a “psychological novel – a study of the moods, thought processes, and perceptions of his hero”

Redburn: His First Voyage[1] is the fourth book by the American writer Herman Melville, first published in London in 1849. The book is semi-autobiographical and recounts the adventures of a refined youth among coarse and brutal sailors and the seedier areas of Liverpool. Melville wrote Redburn in less than ten weeks. While one scholar describes it as “arguably his funniest work”,[2] scholar F. O. Matthiessen calls it “the most moving of its author’s books before Moby-Dick”.

Based on Melville’s experiences as a common seaman aboard the frigate USS United States from 1843 to 1844 and stories that other sailors told him, the novel is severely critical of virtually every aspect of American naval life and thus qualifies as Melville’s most politically strident work.[citation needed] At the time, though, the one thing that journalists and politicians focused on in the novel was its graphic descriptions of flogging and the horrors caused by its arbitrary use; in fact, because Harper & Bros. made sure the book got into the hands of every member of Congress, White-Jacket was instrumental in abolishing flogging in the U.S. Navy forever. Melville scholars also acknowledge the huge number of parallels between White-Jacket and Billy Budd and view the former as a rich source for possible interpretations of the latter.

Omoo: A Narrative of Adventures in the South Seas is the second book by American writer Herman Melville, first published in London in 1847, and a sequel to his first South Sea narrative Typee, also based on the author’s experiences in the South Pacific. After leaving the island of Nuku Hiva, the main character ships aboard a whaling vessel that makes its way to Tahiti, after which there is a mutiny and a third of the crew are imprisoned on Tahiti. In 1949, the novel was adapted into the exploitation film Omoo-Omoo, the Shark God.

Published in 1866, Battle-Pieces and Aspects of the War is a collection of poems about the Civil War by Herman Melville. Many of the poems are inspired by second- and third-hand accounts from print news sources (especially the Rebellion Record) and from family and friends. A handful of trips Melville took before, during, and after the war provide additional angles of vision into the battles, the personalities, and the moods of war. In an opening note, Melville describes his project not so much as a systematic chronicle (though many of the individual poems refer to specific events) but as a kind of memory piece of national experience. The “aspects” to which he refers in the title are as diverse as “the moods of involuntary meditation—moods variable, and at times widely at variance.” Much of the verse is stylistically conventional (more so than modern readers perhaps expect from the author of Moby-Dick), but the shifting subjectivities and unresolved traumas that unfold in the collection merit repeated contemplation. Melville’s Battle-Pieces do not offer a neatly versified narrative of the Civil War but rather kaleidescopic glimpses of shifting emotions and ambivalent reflections of post-war America.(Professor Meredith Neuman)

Typee: A Peep at Polynesian Life is the first book by American writer Herman Melville, published first in London, then New York, in 1846. Considered a classic in travel and adventure literature, the narrative is partly based on the author’s actual experiences on the island Nuku Hiva in the South Pacific Marquesas Islands in 1842, liberally supplemented with imaginative reconstruction and adaptation of material from other books. The title comes from the valley of Taipivai, once known as Taipi.[1] Typee was Melville’s most popular work during his lifetime; it made him notorious as the “man who lived among the cannibals”.

Moby-Dick; or, The Whale is an 1851 novel by American writer Herman Melville. The book is the sailor Ishmael’s narrative of the obsessive quest of Ahab, captain of the whaling ship Pequod, for revenge on Moby Dick, the giant white sperm whale that on the ship’s previous voyage bit off Ahab’s leg at the knee. A contribution to the literature of the American Renaissance, Moby-Dick was published to mixed reviews, was a commercial failure, and was out of print at the time of the author’s death in 1891. Its reputation as a “Great American Novel” was established only in the 20th century, after the centennial of its author’s birth. William Faulkner said he wished he had written the book himself,and D. H. Lawrence called it “one of the strangest and most wonderful books in the world” and “the greatest book of the sea ever written”. Its opening sentence, “Call me Ishmael”, is among world literature’s most famous. 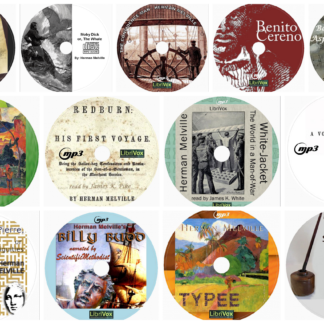