Your order is shipped USPS WITH TRACKING!! Logo is printed right on directly on DVD. No markers written on the disc, No Sticky label that falls off. Help Keep your  discs stored correctly.

DESCRIPTION PER WIKIPEDIA:
The Amazing Mr. X, also known as The Spiritualist, is a 1948 American horror thriller film noir directed by Bernard Vorhaus with cinematography by John Alton. The film tells the story of a phony spiritualist racket. The film is prominently featured in Alton’s book on cinematography Painting with Light (1949).

The film stars Turhan Bey, Lynn Bari, Cathy O’Donnell, and Richard Carlson. Eagle-Lion Films signed a contract with Carole Landis for the part played by Bari, but Landis committed suicide a few days before filming began. The film is in the public domain. 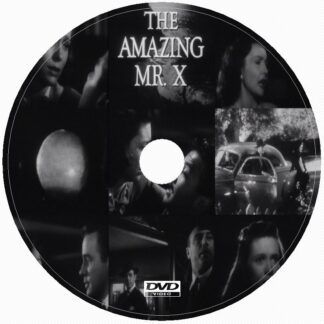