The Book Of Enoch Audiobook MP3 On CD

The Book Of Enoch Audiobook MP3 On CD

You are purchasing The Book Of Enoch Audiobook on MP3 CD, Librivox Public Domain Recording. We find the item and place them on a custom CD. This item will work on your computer and some devices that can play MP3’s.

The Book of Enoch (also 1 Enoch;[1] Ge’ez: መጽሐፈ ሄኖክ maṣḥafa hēnok) is an ancient Hebrew apocalyptic religious text, ascribed by tradition to Enoch, the great-grandfather of Noah.[2][3] Enoch contains unique material on the origins of demons and giants, why some angels fell from heaven, an explanation of why the Genesis flood was morally necessary, and prophetic exposition of the thousand-year reign of the Messiah.

The older sections (mainly in the Book of the Watchers) of the text are estimated to date from about 300–200 BC, and the latest part (Book of Parables) probably to 100 BC.[4]

Various Aramaic fragments found in the Dead Sea Scrolls, as well as Koine Greek and Latin fragments, are proof that the Book of Enoch was known by Jews and early Christians. This book was also quoted by some 1st and 2nd century authors as in the Testaments of the Twelve Patriarchs. Authors of the New Testament were also familiar with some content of the story.[5] A short section of 1 Enoch (1:9) is cited in the New Testament Epistle of Jude, Jude 1:14–15, and is attributed there to “Enoch the Seventh from Adam” (1 En 60:8), although this section of 1 Enoch is a midrash on Deuteronomy 33:2. Several copies of the earlier sections of 1 Enoch were preserved among the Dead Sea Scrolls.[3]

It is not part of the biblical canon used by Jews, apart from Beta Israel (Ethiopian Jews). Most Christian denominations and traditions may accept the Books of Enoch as having some historical or theological interest and while the Ethiopian Orthodox Tewahedo Church and Eritrean Orthodox Tewahedo Church consider the Books of Enoch as canonical, other Christian groups regard them as non-canonical or non-inspired.

It is wholly extant only in the Ge’ez language, with Aramaic fragments from the Dead Sea Scrolls and a few Greek and Latin fragments. For this and other reasons, the traditional Ethiopian belief is that the original language of the work was Ge’ez, whereas modern scholars argue that it was first written in either Aramaic or Hebrew; Ephraim Isaac suggests that the Book of Enoch, like the Book of Daniel, was composed partially in Aramaic and partially in Hebrew.[6]:6 No Hebrew version is known to have survived. It is asserted in the book itself that its author was Enoch, before the biblical flood.

The most complete Book of Enoch comes from Ethiopic manuscripts, maṣḥafa hēnok, written in Ge’ez; which was brought to Europe by James Bruce in the late 18th century and was translated into English in the 19th century. 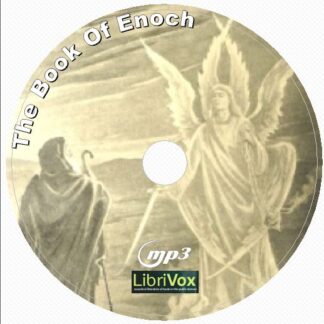 You're viewing: The Book Of Enoch Audiobook MP3 On CD $6.99
Add to cart