You receive all items listed below on a DVD in format.

Your order is shipped USPS 1st Class mail WITH TRACKING!!

Logo is printed right on directly on DVD. No markers written on the disc, No Sticky label that falls off. Help Keep your discs stored correctly.

GPO produced the Warren Commission Report and 26 hearing volumes in 1964. Altogether, GPO’s work for the Commission resulted in nearly 235,000 copies of the report and nearly 5,600 sets of the hearings.

– Volume II – Contains testimony of the following witnesses: James Herbert Martin, who acted for a brief period as the business manager of Mrs. Marina Oswald; Mark Lane, a New York attorney; William Robert Greer, who was driving the President’s car at the time of the assassination; and others.

– Volume III – Contains testimony of the following witnesses: Ruth Hyde Paine, an acquaintance of Lee Harvey Oswald and his wife; Howard Leslie Brennan, who was present at the assassination scene; Bonnie Ray Williams, Harold Norman, James Jarman, Jr., and others.

– Volume IV – Contains testimony of the following witnesses: Sebastian F. Latona, a fingerprint expert with the Federal Bureau of Investigation ; Arthur Mandella, a fingerprint expert with the New York City Police Department; Winston G. Lawson, a Secret Service agent who worked on advance preparations for the President’s trip to Dallas; Alwyn Cole, a questioned document examiner with the Treasury Department; and John W. Fain, John Lester Quigley, and James Patrick Hosty, Jr., agents of the Federal Bureau of Investigation who interviewed Oswald, or people connected with him, at various times during the period between Oswald’s return from Russia in 1962 and the assassination; and others.

– Volume V – Contains testimony of the following witnesses: Alan H. Belmont, assistant to the Director of the Federal Bureau of Investigation; Jack Revill and V. J. Brian of the Dallas police, who testified concerning conversations Revill had with James Patrick Hosty, Jr., a special agent of the FBI; Robert A. Frazier, a firearms expert with the FBI ; Drs. Alfred Olivier, Arthur Dziemian and Frederick W. Light, Jr., wound ballistics experts with the U.S. Army laboratories at Edgewood Arsenal, Md.; J. Edgar Hoover, Director of the Federal Bureau of Investigation; and others.

– Volume XII – Contains testimony of the following witnesses: Dallas law enforcement officers who were responsible for planning and executing the transfer of Lee Harvey Oswald from the Dallas City Jail to the Dallas County Jail; and Don Ray Archer, Barnard S. Clardy, and Patrick Trevore Dean, who participated in the arrest and questioning of Jack L. Ruby; and others.

The numbering of the exhibits received in testimony before the Commission is not completely consecutive; the unused numbers are noted in the table of contents. Also, various systems of designation were used in connection with deposition and affidavit exhibits, so that the designation of some of these exhibits begins either with a letter or a number higher than 1—e.g., Jones Exhibits A-C, Smith Exhibits Nos. 5000-5006.

Almost all of the reproductions contained in the exhibit volumes consist of photographs of the exhibits. The legibility of many documentary exhibits is poor, because some exhibits were copies rather than originals and many others were discolored when tested for fingerprints. In some cases where legibility was particularly bad, the contents of the document have been typed out, and reproduced together with a miniature photograph of the exhibit. A few exhibits of negligible relevance were not reproduced because of their length or for reasons of taste. The omissions are described in the tables of contents. In a very small number of cases, names, dates, or numbers have been deleted from exhibits for security reasons or for the protection of named individuals.

NOTE: THIS ITEM DOES NOT INFRINGE ANY COPYRIGHT, TRADEMARK OR ANY LISTING POLICY. THESE ARE IN THE PUBLIC DOMAIN FROM THE GPO. REF.  THE OTHERS ARE MADE BY PUBLIC. A FULL LIST IS AVAILABLE UPON REQUEST. PORTIONS OF THIS PRODUCT ARE COPYRIGHTED PROPERTY OF THE PUBLIC, INCLUDING, BUT NOT LIMITED TO: PRINTED INSTRUCTIONS, TEXTS AND GRAPHICS DESIGN. 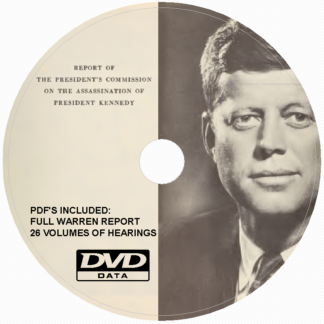