You are purchasing The Life and Adventures of Martin Chuzzlewit By Charles Dickens Audiobook MP3 CD, Librivox Public Domain Recording. We find the item and place them on a custom CD. This item will work on your computer and some devices that can play MP3’s.

The Life and Adventures of Martin Chuzzlewit (commonly known as Martin Chuzzlewit) is a novel by Charles Dickens, considered the last of his picaresque novels. It was originally serialised between 1842 and 1844. While he was writing it Dickens told a friend that he thought it was his best work, but it was one of his least popular novels.

The late nineteenth century English novelist George Gissing read the novel in February 1888 “for refreshment” but felt that it showed “incomprehensible weakness of story”.

Like nearly all of Dickens’s novels, Martin Chuzzlewit was first published in monthly instalments. Early sales of the monthly parts were disappointing, compared to previous works, so Dickens changed the plot to send the title character to the United States. Dickens had visited America in 1842 in part as a failed attempt to get the US publishers to honor copyright laws. He satirized the country as a place filled with self-promoting hucksters, eager to sell land sight unseen. In later editions, and in his second visit 24 years later to a much changed US, he made clear it was satire and not a balanced image of nation in a speech and then included that speech in all future editions.

The main theme of the novel, according to Dickens’s preface, is selfishness, portrayed in a satirical fashion using all the members of the Chuzzlewit family. The novel is also notable for two of Dickens’s great villains, Seth Pecksniff and Jonas Chuzzlewit. Dickens introduced the first private detective character in this novel. It is dedicated to Angela Georgina Burdett-Coutts, a friend of Dickens. 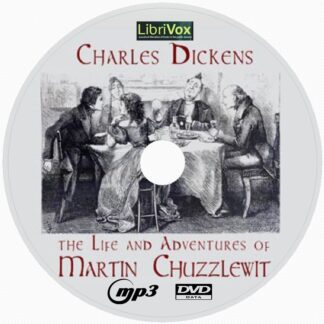 You're viewing: The Life and Adventures of Martin Chuzzlewit By Charles Dickens Audiobook MP3 CD $5.99
Add to cart