The Odyssey AudioBook MP3 On CD

The Odyssey AudioBook MP3 On CD

You are purchasing The Odyssey Audiobook on MP3 CD, Librivox Public Domain Recording. We find the item and place them on a custom CD. This item will work on your computer and some devices that can play MP3’s.

The Odyssey (/ˈɒdəsi/;[1] Greek: Ὀδύσσεια, Odýsseia; Attic Greek: [o.dýs.sej.ja]) is one of two major Ancient Greek epic poems attributed to Homer. It is one of the oldest extant works of literature still read by contemporary audiences.

As with the Iliad, the poem is divided into 24 books. It follows the Greek hero Odysseus, king of Ithaca, and his journey home after winning the Trojan War. It takes Odysseus ten years to reach Ithaca after the ten-year Trojan War. In his absence, Odysseus is assumed dead, and his wife Penelope and son Telemachus must contend with a group of unruly suitors who compete for Penelope’s hand in marriage.

The first English translation of the Odyssey was in the 16th century, but the poem was known earlier than 566 BCE, when Peisistratos created a festival which featured performances of the Homeric poems. In antiquity, Homer’s authorship of the Odyssey and Iliad was not questioned, but contemporary scholarship predominately assumes that the poems were composed independently, and the stories themselves formed as part of a long oral tradition. Given widespread illiteracy, the poem was performed by an aoidos or rhapsode, and more likely to be heard than read.

A few noteworthy elements of the text are its non-linear structure and unreliable narrator[who?]. Scholars still reflect on the narrative significance of certain groups in the poem, such as women and slaves, who have more influence over the story than they would have had in the historical Ancient Greece. This focus is especially remarkable when considered beside the Iliad, which centres the exploits of soldiers and kings during the Trojan War.

The Odyssey is regarded as one of the most significant works of the Western canon. Adaptations and re-imaginings continue to be produced across a wide variety of mediums. In 2018, when BBC Culture polled experts around the world to find literature’s most enduring narrative, the Odyssey topped the list. 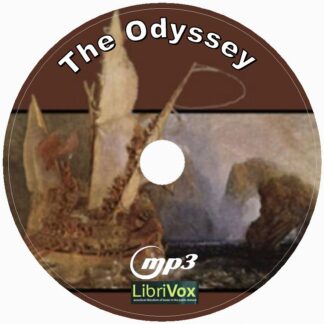 You're viewing: The Odyssey AudioBook MP3 On CD $5.99
Add to cart